This page describes the features of the ShinyProxy interface and the corresponding documentation.

After logging in, the user is redirected to the main page. This page contains a list of apps.

As the name suggests the app page is used to display a (running) app. With all features enabled this page can look like: 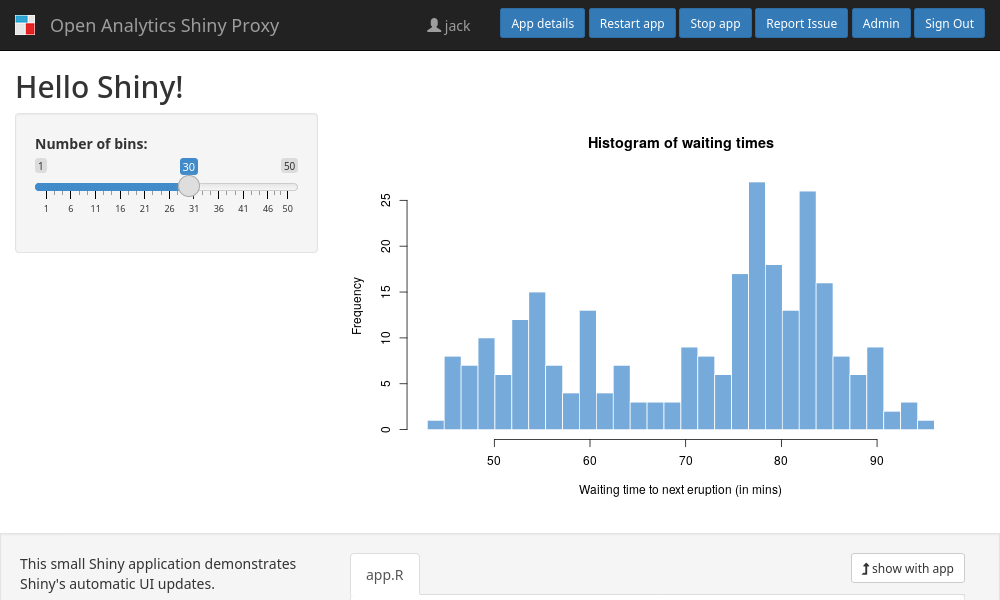 Using multiple instances of an app

There are two ways to control this behavior:

The above example allows a user to run up to 5 instances of RStudio and one instance of the hello application. When the user can run only one app, the Switch instance button is replaced by a Restart instance and Stop instance button.

After clicking on the Switch instance button, a popup is shown where the user can manage the instances of the app: 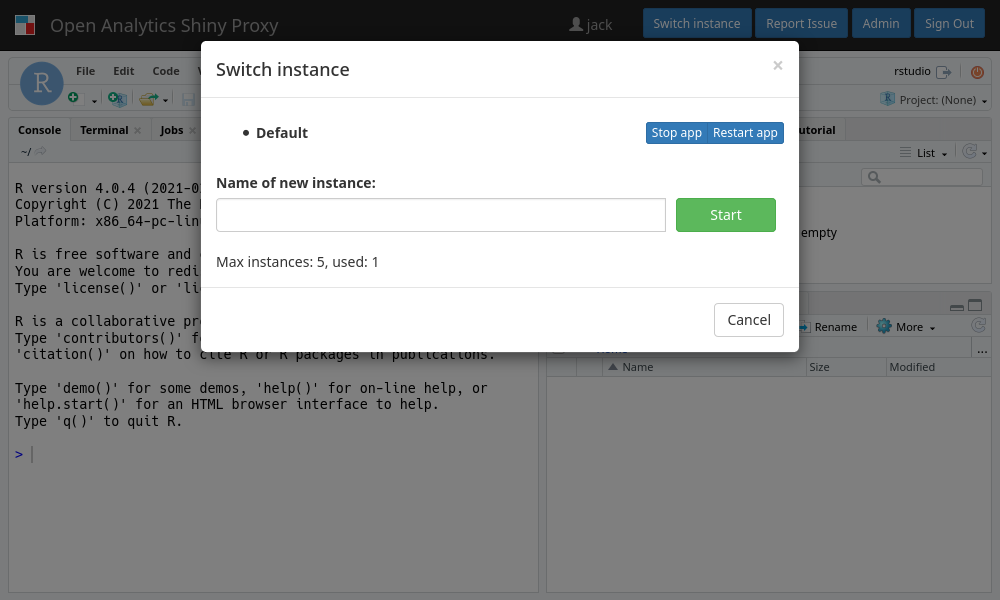 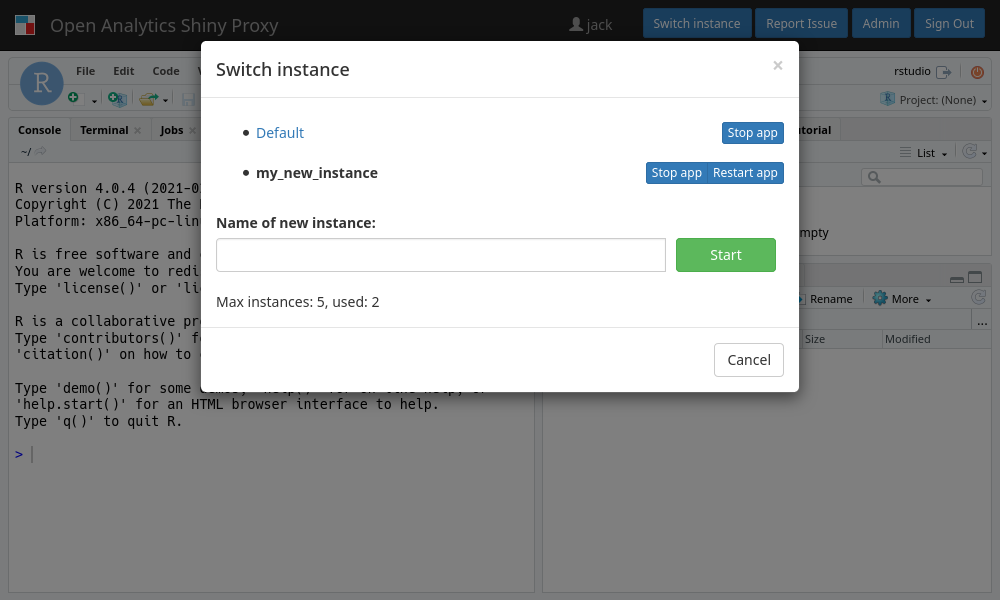 Note: the different instances of each app are fully isolated and are running in a separate container. This also means that any inactive instances will be cleaned up, independently of any other instance of the same app. A user can stop apps themselves using the Switch instance button, even for apps running in a different tab of their browser.

Many apps used in ShinyProxy use websockets for communicating with the backend server. Due to the nature of websockets, this connection can be disturbed by suboptimal WiFi connections, server restart etc. Therefore, ShinyProxy contains a mechanism for restoring this connection. However, since ShinyProxy does not know how an app internally works, this is a best-effort approach. Therefore, it is always better to use any reconnecting mechanism which is natively supported by the app. You can configure this option by specifying:

When the mechanism is enabled and a websocket connection of the apps get interrupted, ShinyProxy notices this and starts the restore procedure. First of all, a message is shown to the user: 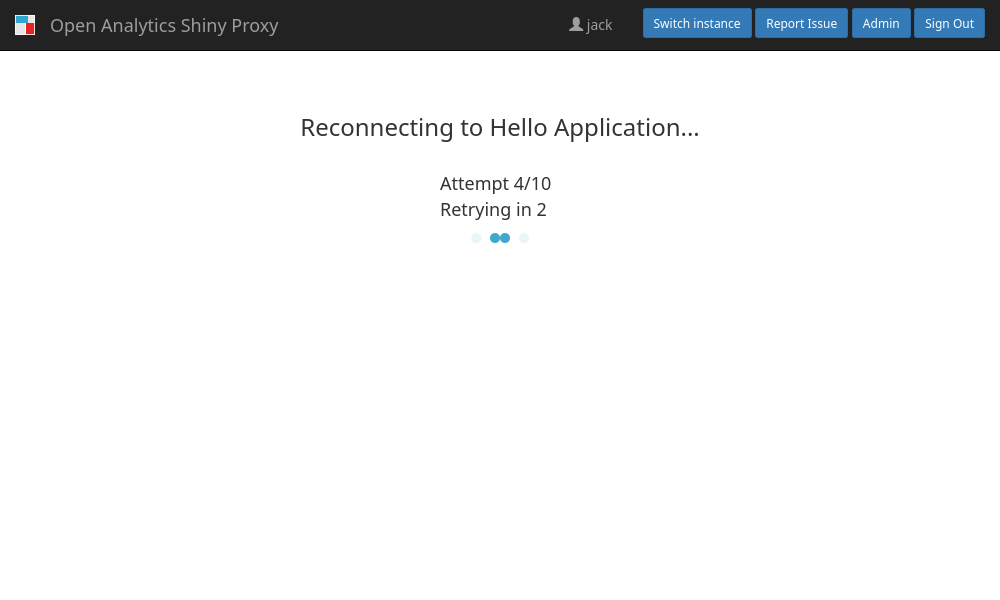 Note: you can tell ShinyProxy to reload the iframe instead of using the special Shiny function ($socket.reconnect()) by setting the shiny-force-full-reload option in the app specification to true (see above).

As discussed earlier, the reconnecting mechanism is a best-effort approach. In an ideal case the app should be responsible for restoring the connection. The reason is that the developers of an app know better how to restore the websocket connection. It is not uncommon that extra actions must be taken care of when reconnecting. Such situations cannot be handled by ShinyProxy. Note that as a developer of a Shiny app, you can add native support for reconnecting.

The following table shows how the mechanism works in different situations. This should help an administrator on deciding whether to activate the mechanism.

The short advice for an administrator is:

The admin page is only visible to users which are part of the groups configured in the proxy.admin-groups property. The page displays an overview of the current running apps. 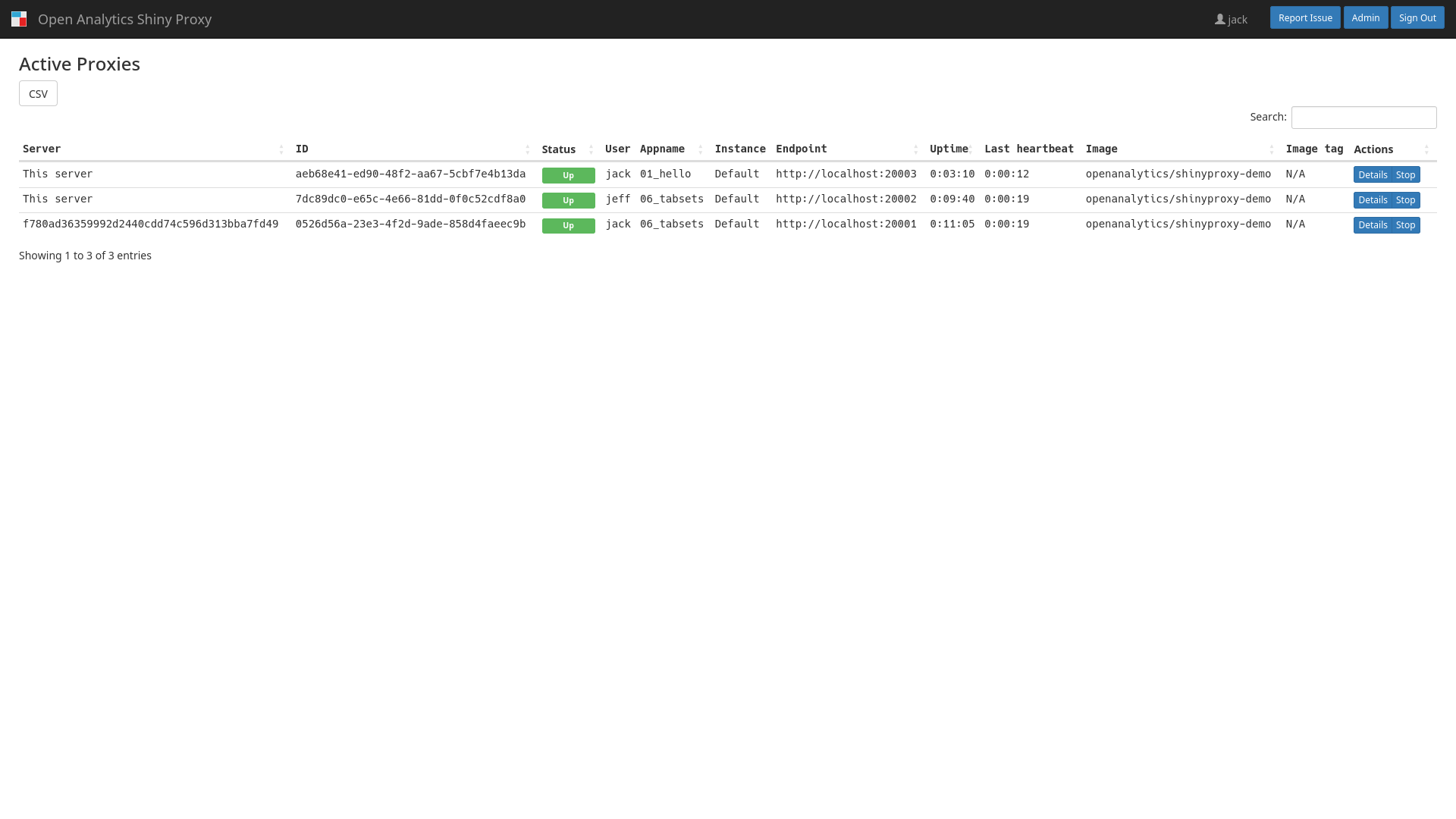